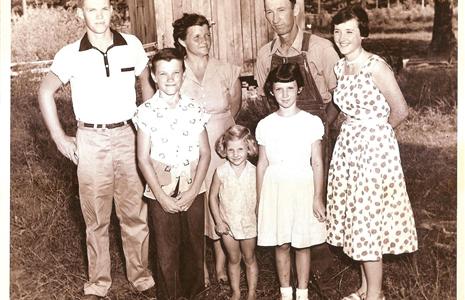 This beautiful stretch of farm land located in Manchester, TN has been in the Vickers family for nearly 100 years.  The original owners were James Frank and Flossie Vickers (Pa and Ma) although it is unclear exactly what year they purchased the farm.  In 1940, Pa divided the land among his four sons; Horace, Luke, Wade and Marvin.  Ma and Pa continued to live on the property until they both passed in a house that is still standing on the property today.  This is the home you will hear us refer to as the "old house".  After the land was split between Pa's sons Marvin and his wife Bessie Vickers began to raise their family at Farrar Hill Farms.  You will often hear us refer to Marvin and Bessie as "Grandma" and "Daddy Pop".  Throughout their years at Farrar Hill Farms Grandma and Daddy Pop had 6 children, 3 boys and 3 girls.  Grandma and Daddy Pop continued to live at Farrar Hill Farms until 2001 when Grandma passed away.  After Daddy Pop passed in 2003 the farm was divided among his children and eventually the entire property was purchased by his son Larry Vickers.  Larry Vickers and his wife, Brenda Vickers, are the current property owners.  After having several family gatherings and a couple of family weddings at the farm we decided to share a little piece of our heaven with the public in 2013. 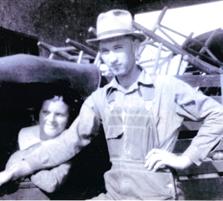 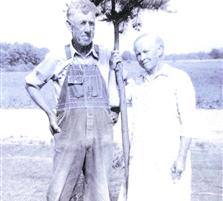 This image was captured of Marvin & Bessie Vickers at Farrar Hill Farms in 1937.

Frank and Flossie Vickers pose for this picture in 1940 after planting this tree at Farrar Hill Farms.